The Bread Maker is a supporting character in the Nickelodeon animated series Breadwinners. The Bread Maker is a legendary figure who lives in the bread mines and can be summoned via rubbing the magical toaster, which SwaySway and Buhdeuce got the first time they met him.

"The baker of bread! The yielder of yeast! And deliverer of dough! The Bread Maker is a magical dude who lives in the center of the planet. Not only does he make all the bread, but he's also made of bread! He’s super cool and wise, and he’s always willing to offer a slice of advice to his two favorite bread heads."

The Bread Maker wears a white chef hat, has fair skin and black hair and also has a black mustache. He is muscular and wears red wristbands, red boots, and a red strap around his body with a bread symbol in the center.

The Bread Maker is the Breadwinners mentor. SwaySway and Buhdeuce love watching the Bread Maker do his magic. And even though they ask him the weirdest questions, whenever they're in trouble he's on to their rescue.

The Bread Maker gets annoyed by the Breadwinners’ shenanigans, but he has a soft spot for them and calls them his ”ducklings”.

T-Midi is obsessed with the Bread Maker. He acts like sort of a fanboy to him.

The Lava Mole is a nuisance to the Bread Maker who constantly tries to start a fight with him. Even though he always loses. They have been rivals since they were babies. 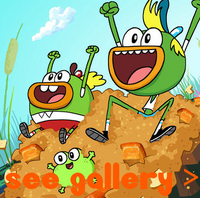