"Breadwinners" is a four-and-a-half minute short film created by Gary Doodles and Steve Borst to entertain fellow animators. The pilot would later evolve into the Nickelodeon TV series of the same name. It was uploaded to YouTube on August 22, 2012, and was later remade with improved animation and voice acting as well as censorship.

The Pilot begins with some Geese flying into the Rocket Van. SwaySway swipes them away with the windshield and asks Budeuce what their next stop is. Buhdeuce says it's 86-75-3-0-9, Webster Lane. Jenny Quackles placed an order for a dozen loads of Jelly-Filled Alfalfa Bread. Buhdeuce then asks SwaySway if he can drive the Rocket van just this once. SwaySway says he has no hand-eye coordination, no experience driving anything, and that he's not even tall enough to reach the most of the controls. Yet he doesn't see why not.

Then SwaySway says step one is to adjust the mirrors. Buhdeuce then sees a monster and throws the mirror at it. Then step two is aquaint yourself with the controls. Buhdeuce says to the controls that he likes sandwiches and romantic comedies, then asks if the gear stick if it wants to go skateboarding. It breaks off and Buhdeuce daydreams about going skateboarding with it until SwaySway snaps him out of it. Then SwaySway says step three is if to drive in a perfectly straight line is this: up-up, down-down, left-left, right-left, blue-red, blue-red, green, up-down, twisty-twist, down-down, right-right, right-right, right-right, big left, and smackity-smack, smackity-smack. Buhdeuce then kicks one of the gears with his butt, causing the Rocket Van to spiral downward. Buhdeuce asks SwaySway does this mean they're gonna crash and burn in a firey death, and SwaySway says that it probably does. But, it also means something far more important: they can finally have that Zero-G dance party they always wanted to have. 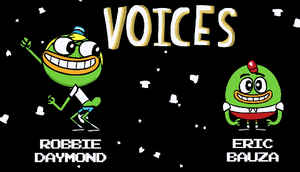 Breadwinners was created by Gary "Doodles" Di Raffaele and Steve Borst. It was conceived as a four-and-a-half minute animated short from Di Raffaele's efficiency apartment in Studio City, Los Angeles (dubbed the "Doodle Chamber"). The two had previously met in Burbank while working on an animated series, Mad, in 2012. The protagonists, originally unnamed, were drawn by Di Raffaele as part of a collaboration with Borst. Both were drawn tossing a piece of bread up in the air; Di Raffaele explained that the premise came as an extension of his appetite for bread, a staple of meals from his Italian-American upbringing, with friends sometimes calling him a "duck". The latter responded positively to the drawing, saying that he could produce something from it.

The credits of the pilot give special thanks to the following people: